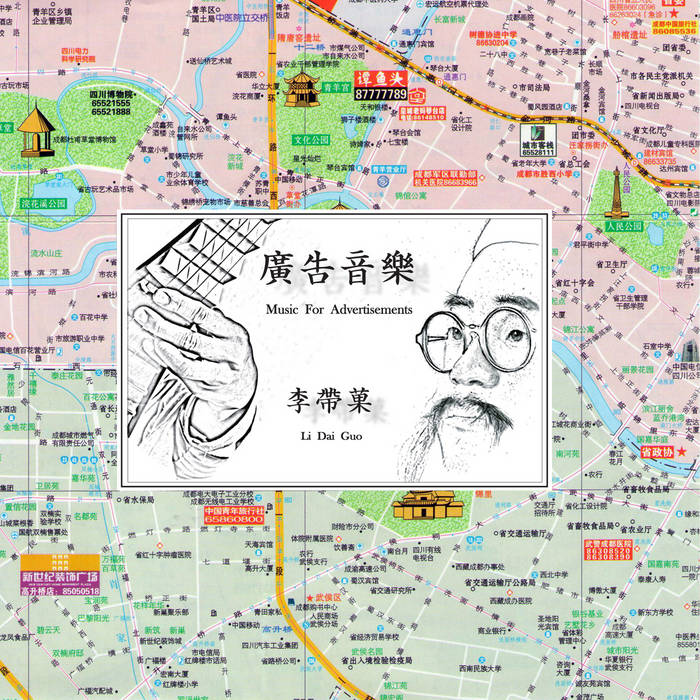 F. Traditional instruments, unconventional results. Y'all can argue about whether this is Traditional, Experimental or Fusion- I won't hear a word 'cause I'm going back under the 'phones to dig this marvel some more. 白白！^_^ Favorite track: The Rickshaws at New South Gate Bus Station 新南门车站的三轮车.

Li Daiguo has carved out a niche within Mainland China that few others occupy, that of skilled improvisational artist (he has a reputation for leaving jaws on the floor, layman and critic alike), musical polymath (proficient at a dozen traditional instruments as well as a deft vocal gymnast) and dynamic live performer known for his eclectic collaborations with a rich roster of characters and ensembles, including transgressive Japanese butoh dancers, fellow all-star experimentalists and other lunatics that he meets when he is busking, an activity of which he is quite fond.

Music for Advertisements sees Li presenting a series of sonic advertisements for seven locations that the 32-year-old appreciated during his six years in Chengdu, the southwestern regional hotspot, creative hub and capital of the country’s infamous Sichuan Province.

Using instrumentation dominated by his signature pipa and erhu and accentuated by a lush arsenal that incorporates everything from the cello to artfully-placed beatboxing, Li skillfully brings the 2300-year-old city to life with this dynamic series of self-produced sonic snapshots characterized by sudden and drastic changes of emotion and instrumentation.

“Music for Advertisements is about emotions that I had and observed that were associated in my mind with things going on around Chengdu,” Li said. “Not necessarily big things or events, but just little things that you might notice and have a feeling about—like the way that traffic moves or the atmosphere in hospital hallways.”

Highlights include the chilling pipa-spiked “Green Ram Daoist Temple”; the austere beauty of “The 'Beautiful Thai Girls' Under the Old South Gate Bridge,” a brief cinematic sketch that uses layers of hypnotic strings to conjure images of the secretive nocturnes who congregate around the city’s ancient landmark, and “Chengdu Tuberculosis Hospital”, a jaunty, fiddle-fueled effort that spins a resonant tale of mortality within its ephemeral-yet-memorable running time.

With Li as the city’s unofficial composer, Chengdu has never sounded so good.

LI DAIGUO makes music with the following instruments: pipa, nanyin pipa, members of the huqin family (including the erhu, sihu and banhu erxian), a variety of ethnic flutes (including the hulusi, koudi, bawu, xiao and the nanxiao, the Chinese predecessor of the better-known Japanese shakuhachi), the Zimbabwean mbira, violin, viola, cello, beatboxing and overtone singing.