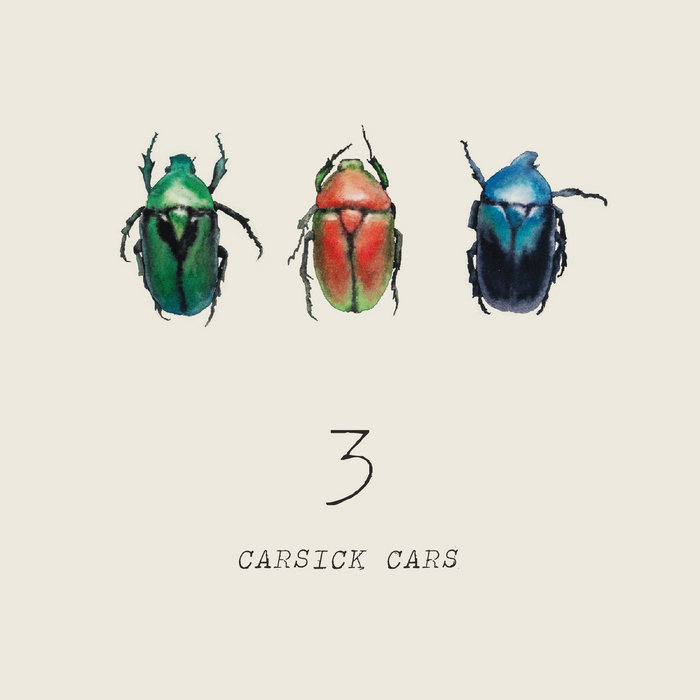 Propuesta Cultural An album that will undoubtedly wake you up filling you with energy.

NOTE: CD has alternate language versions to the vinyl and different bonus tracks in the download!

After five restless years, Carsick Cars, China’s most influential and dynamic indie-rock band, return with their most mature and exciting release to date.

Available in April 2014, ‘3’ is the aptly titled third album for the Beijing based trio. ‘3’ sees vocalist, guitarist and founding member Zhang Shouwang return with his signature sound, seamlessly combining drone with shimmering pop melodies. The result is assured to please established fans and new listeners alike.

‘3’ began with an auspicious start as preview single ‘She Will Wait’ shot to the top position on China’s leading music sharing website, Douban. For this reason among others, ahead of it’s launch in Australia, ‘3’ is already being hailed as one of the most important Chinese records of the decade. Zining Cui of Creative Asia, China’s premier platform for contemporary arts, stated that “China needs a big enough sound to shout out for attention - and Carsick Cars remind us of such a sound.”

The record, the first full length to be released by the current members, is a logical progression for long standing fans of Carsick Cars. ‘3’, however, starkly contrasts in maturity and complexity from the band’s straight ahead noise-pop self titled debut in 2005. There are a few tracks reminiscent of well known singles from their prior two albums (most notably ‘Reaching The Light’), but most disparate is how ‘3’ showcases the extraordinary technical skill of Shouwang as a guitarist and the potential born from the unity of these three musicians.

While Carsick Cars wind up their lengthy United States tour with psych-drone five-piece Flavour Crystals, ‘3’ will be released in Australia on CD and LP on April 14th through Australasian DIY music specialist tenzenmen. Each format features variations on recording, bonus tracks and lyrics which promises to satisfy Australian fans until Australian tour dates are confirmed. Pre-orders with immediate downloads are available from today at tenzenmen.com .

“It is pretty clear that this album, probably the most sophisticated the band has yet put out, will also be the most accessible and loved of their work to date” - Zining Cui - Creative Asia

“[This song] has the ability to become an instant indie rock hit. Play it loud and you’ll be singing along by the time the chorus hits.” - Dan Jarvis - Midwest Action!

“3 was well worth the wait. Singer/Guitarist Zhang Shouwang has managed to retain the same energy the band had in their early days, and with the help of bassist He Fan & drummer Sun Heting, they’ve put that energy into what is easily their best album to date.” - Dan Jarvis - Midwest Action!